Before you consider pushing your first map for ranked, make sure to first fulfill these basic pre-requisitions:

Once all the above-mentioned points are met, you can go ahead and read the rest of this page on on how to get your map modded and eventually ranked.

Modding is a term borrowed from osu!. It is the process of reviewing and providing feedback for a map via editor and/or in-game analysis. Maps have to go through this process to eventually end up ranked in ScoreSaber. See thisopen in new window guide to get started with modding maps.

# Get a mod from a Ranking Team member

Before you contact a ranking team member in order to have your map ranked, please pay attention to their queue rules. A mod is a list of changes to make in a map that are issues within said map. It can range anywhere from playability issues to rank-ability issues with the ranking criteria. This step can generally take anywhere from an hour to a month depending on ranking team activity and song of choice. You work with the RT member to fix all the ranked issues with the maps and work through any listed playability issues. Generally requests are handled by looking for open ranking queues in ScoreSaber's Discord server. The green circles indicate queues that are open for maps. 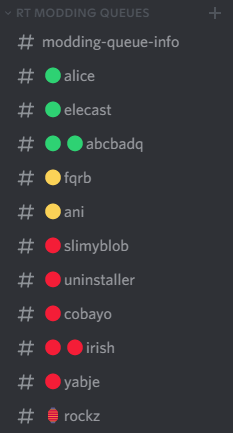 Once you read the rules of the modder and made sure that your map matches said rules, send them a direct message asking for a spot in queue. Generally, having information like the song title, song artist, BPM, length of the song, number of difficulties going for rank, are helpful to include in your message since they can make team members more interested in choosing your maps. If a person from the team accepts your map, they will explicitly tell you they have. You shouldn't have multiple people modding your map at the same time to avoid having overlapping mods and wasting someone's time.

# (Optional) Get a mod from a Student

Student mods are a great way of getting ranking team eyes on a map, however this process takes extra time compared to a direct mod from a ranking team member. This doesn't guarantee the map will enter queue, it will depend on the student's mentor to decide if they want to help you ranking your map.

# Work on the map when you get the mod

Once you have received the mod, acknowledge it and work to fix the map in a timely manner. Don't rush for fixes, but remember that fixing it when the map is still fresh in both you and the modder's mind can be beneficial in working towards a better map.

A mod will generally be a line by line list of issues with the map. Sorted by beat number, issue severity, and the issue itself. Example of a mod: 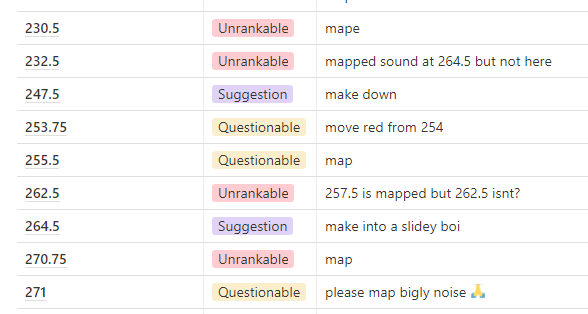 While everyone's system for making a mod is different, anything labeled as "Unrankable" or "Questionable" requires justification on the mapper's part as to why it is not fixed or why is it that way.

The mapper will make changes to their map and justify what they didn't change. While it is not required to make changes based on suggestions, doing so will generally make your map better, and the modder will appreciate his efforts being rewarded.

If a modder doesn't respond in a week or so feel free to remind them unless they have explicitly stated a timeframe they will be unavailable. Modder's have other obligations that require their time but things are occasionally forgotten.

# Put the map in the ranking-queue

Example of a leaderboard ID:

If your map consists of more than one difficulties, you will need to provide the ID of each difficulty, preferably in the following format:

# Wait for the map to go through the ranking-queue

At this point the mapper (you) may receive feedback in the form of a QAT downvote indicating that said map should be fixed. QAT votes affect queue position so having a positive rating is beneficial. If a map is re-uploaded, the initial modder who put the map in queue should be notified. Every new upload requires a new set of leaderboards so it is advised to take feedback in batches and upload when only needed. You should always reupload after fixing a map with ranking team or QAT.

At 3 RT upvotes and 0 downvotes your map gets qualified. The map gets increased attention due to its qualified status and issues are generally presented to the mapper. The mapper can then reupload the map as necessary before the map is officially ranked. This period is of 7 days. If the map is reuploaded then the 7 day period is reset.

# Your map is now ranked

Congratulations! The 7 days of qualified period has passed, and your map is now considered ranked.

You must never make your ranked maps unavailable to players. If you violate this rule, you will be banned from ranking any maps on ScoreSaber in the future.