# About the Mapping Criteria

The mapping criteria involves two sections: one for rules, and one for guidelines.

Further included in this document are a glossary, addendum, and appendix.

Lastly, the appendix includes examples and clarification of issues referenced in the mapping criteria.

Formatting for referencing criteria is as follows: (Main Section).(Subsection).(Criteria). The main section designations are R for rules, G for guidelines, and A for addendum. The subsections are designated by a number underneath each main section. Each individual criteria is ordered alphabetically under the subsection to which it applies.

For any comments, questions, or concerns about material included or not included within the criteria, feel free to message a member of the Criteria Assurance Team at ScoreSaber.

Mapset: A set of difficulty .dat files with one info.dat file that references them.
Difficulty Spread: The set of difficulty levels present in the map. An example of a mapset with a 3 difficulty spread would be a mapset consisting of a Normal, Hard, and Expert difficulty.
Gameplay Modifiers: Disappearing Arrows, Ghost Notes, Faster Song, etc.
Game Mode: 360 Degrees, 90 Degrees, Standard, One Saber, etc.
4x3 Grid: The allowed 12 spaces for note placement in Standard mode.

BPM: Beats Per Minute. Defines the tempo of the song.
Variable BPM: Describes songs which change BPM irregularly.
Offset: The time difference between the start of the sound file and the beat of the song, used in the editor to align the beat lines with the beat of the song.
Beat: 1 fraction of a minute as defined by the BPM of the song.
(Timing) Precision: Precision, measured in fractions of a beat. For example, ¼ precision refers to ¼ of a beat.
Effective BPM: The speed in which one hand is making a ½ precision movement relative to the BPM. For example, the effective BPM of a ¼ precision 1 hand motion in a 100 BPM song would be 200 BPM.

Objects: Bombs, notes, or walls.
Interactive Objects: Bombs and notes, as well as walls that force you to dodge or duck.
Hitbox: An invisible box around an object that is used to detect collisions and cuts.
Swing path: The path of a swing used to hit a note. Can be divided into the Pre-cut swing and the follow-through swing.

Maps must not require the use of any external mods or programs to play.
Maps must be designed to be played without any gameplay modifiers.
Maps must be ‘Standard’ game mode maps.

A map cannot have any objects that are clearly placed or positioned unintentionally by the mapper.

The map’s BPM must perfectly match one of the BPMs of the song or a multiple of one of the BPMs of the song.
A map may use the effective BPM of a section during the map as the base BPM as long as the difficulty of the section represents the overall difficulty of the map.
Maps with variable BPM timing must be timed as accurately as possible.
The map’s offset must be as close to perfect as possible.

All notes must be perfectly on time to a distinct sound in the music.
The first note of a slider must be on time to the sound the slider is mapping. The precision of the following notes may be adjusted for playability.

Rhythmic overmapping is not allowed. A single sound cannot be represented by multiple notes unless those notes fall into a single swing.
Simplifying timing inconsistencies to match an understandable rhythm is allowed if the inconsistencies do not arise from a BPM or rhythm change.

All rules on formatting are here

All rules on difficulty spread requirements are here

A map must have sufficient lighting throughout the song.

A map’s audio must not be modified to add excessive amounts of silence anywhere in the song.
A map’s audio must consist of musical elements set to an identifiable structure.
The length of the map’s audio, ignoring any added silence, must be longer than 20 seconds.

For any game mode in a mapset with a difficulty going for rank:

All difficulties in a mapset that are going for rank must not contain any form of unfair modification via editing of the .dat file manually or through external mappers. This includes any form of custom walls, map reversal, and note jumping.

Resetting patterns in a map should allow an appropriate amount of time between the resetting notes, consistent with the difficulty of the map.

Notes and bombs should not impede vision of other interactive objects without an indication and/or implication of where and what the blocked objects will be.

Walls should correspond to a musical element.

Repeated sections of music should feel similar, and similar sections should not play excessively differently unless there is some change in the music.
Within a section, representation of a repeated sound with the same volume and pitch in the absence of other sounds should not excessively change.
Mapping decisions around consistent representation should be understandable.

Sufficient lighting means that some form of lighting that follows the music should be present in sections of the map that contain interactive objects. Any form of automatic light generation that creates lighting that fits this criteria is allowed. 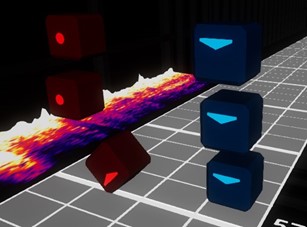 These are examples of parallel same color notes on the same snap. 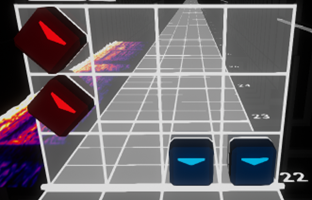 The blue note is in the pre-cut swing path of the red note. 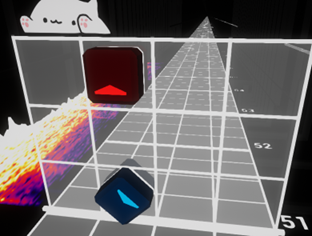 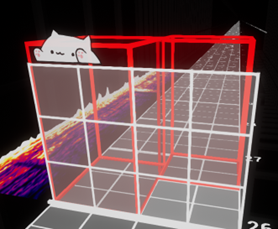 These bombs that force a saber to stay outside the 4x3 grid in order to avoid contact. 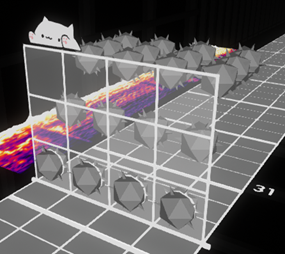 The arcs of the pre-cut swings overlap. 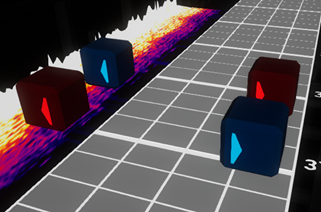 The arcs of the follow-through swings overlap. 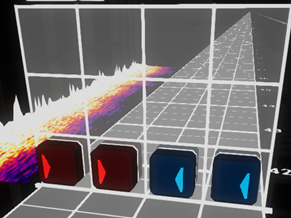 The red up note is in the follow-through path of the blue up note. 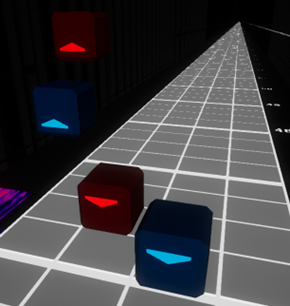 Transferred to the Wiki by riasuh